I’ve recently come to understand that everything we are and hope to achieve starts within… and starting with this article and a series of upcoming blog posts, I’d like to explain my process in hopes that you will be able to take something useful from it and use these ideas to inspire you to transform your Pilates practice and possibly more.

The Queen of “What If”

I recently had the pleasure of taking an entire week off from teaching. I spent the whole time with my husband and two kids, enjoying each day, moment by moment and not worrying about work, or the next week.

Sounds pretty luxurious, right? But living in the moment and enjoying each moment is a fairly new way of living for me. There was a time when I couldn’t take time off and enjoy it no matter how hard I tried.

Two and a half years ago I was the queen of “what if”, making things happen, getting things done, and figuring out what to do next. I could be really good at keeping my mind constantly occupied and concerned about things when I thought I needed to.

While I did get a ton accomplished I seriously neglected anything that resembled downtime, fun and happiness.

In May of 2010 I reached a major turning point in my life. Earlier in the year I was introduced to the concept of releasing the need to force outcomes. I learned to trust that things are the way they are for a reason and to stay present in the moment. But the most life-changing piece of advice I’ve ever received can be summed up in the following two simple sentences:

I am in charge of my own happiness.

Surrender and trust the Universe.

These might appear to be absolutely contradictory statements, but, in fact they are actually complementary sides of the same coin.

And once I finally learned to really incorporate these concepts into every moment of my life, things took a major turn for the better. And that’s putting it mildly!

However, to those close to me it probably didn’t look so breezy and wonderful and, in fact, it was a very challenging and fiery path I had to walk. I never could have made it to the current, positive space I’m so grateful for without having walked through those past challenging fires.

And it was the fire that made me strong and taught me everything I needed to learn—I wouldn’t change a thing today.

I know you’re wondering how in the world Pilates fits into all this. Here’s the thing…

Recently I realized that the process I went through in creating happiness and surrendering to the Universe has been a direct mirror of my Pilates practice. Everything I learned in Pilates I have used to transform my life mentally as well as physically.

In the same way that Pilates starts deep within the body, using imagery to activate the deepest muscles, my understanding of happiness and surrender was an inside-out process.

One day, when I was picking my 4-year-old son up at soccer practice, I couldn’t help but notice the t-shirt a man was wearing. The shirt had a Vince Lombardi quote on it that read, “The harder you work, the harder it is for you to surrender”.

I had no idea who Vince Lombardi was, but during the past few weeks I’d been focusing on surrender and releasing my efforts to force outcomes. When I saw this quote, I was like, “Yes! That is so true. The harder I push myself to figure things out and make things happen, the harder it is to surrender.”

This was exactly what I needed to hear on this particular morning. I’d been putting a lot of pressure on myself and was feeling a bit like a hamster on a wheel. I was grateful for this awesome quote that gave me permission to relax and stop pushing so hard.

A few minutes later I was looking at this man’s shirt and noticed that it had an image of soccer balls accompanying the Lombardi quote and it occurred to me that my interpretation of the quote was not at all the meaning that was intended.

This shirt was suggesting that the harder you work and the harder you push yourself, the harder it is to give up; to stop moving and achieve your goals. It was an allusion to gaining momentum, really. So according to the t-shirt wisdom, surrender is a bad thing. If you’re playing a sport of some sort, you’ll be a loser if you surrender.

This is exactly the opposite of my interpretation of this quote! I considered it a warning to NOT push yourself and to instead surrender to reality so that you can stop banging your head against a wall and find the true and effortless path to success! I thought the quote meant: The harder you try, the more resistance you create.

So according to my interpretation, when you surrender you allow yourself to see the truth and can then clearly see the path to success. And when you see that path, it’s impossible to stop moving along it and reach your goal with ease.

For me, surrender is a positive idea and generates feelings of peace vs. feelings of loss, guilt, stress or giving up entirely on everything.

It’s wild to me that this concept could have two such completely different meanings depending on the perspective of the person reading it. But it turns out there was yet another interpretation that a I hadn’t considered.

I was talking with my friend and I mentioned this quote and before I even told him what it meant to me, he told me his perspective. This was a THIRD way to interpret it and it surprised me yet again!

Even when the right answer is biting you like a snake, you’ll miss it because you’ve already invested so much in your method or view that it’s too painful to admit to the wasted time and effort spent headed in the wrong direction.

It All Starts in the Mind

The key here is that it all starts in the mind. How we choose to perceive the world outside—the reality that surrounds and infuses us—determines the experience we have, both physically and mentally. When we see surrender as a negative, it becomes a negative and when we use surrender as a tool to release the things that block and blind us, it works that way too.

So let’s put this concept of surrender into context with Pilates and your practice.

Consider the lowly sit-up. We’ve all heard the old adage that states: If a little is good, then a lot must be amazing. And we all say, “Yeah, well that’s been proven to be false so I won’t do that when it’s my turn.”

But maybe we say we know it’s false, but when it comes down to it, we still go for a lot instead of a little when it comes to certain things.

For example, I know folks who have done 100 crunches every day for years thinking they were strengthening their cores and toning up their stomachs, yet they never achieved the results they wanted.

But when they stopped mercilessly forcing themselves through the daily 100-sit-up routine and relaxed into the Pilates method to strengthen the core, they finally achieved the results they had always wanted—and with so little effort, by comparison, that they truly couldn’t believe it at first.

When you are used to doing 100 reps of something, or forcing yourself through an exercise regime, no matter how much it hurts, making the switch to Pilates-based movement can be difficult at first. It can feel a lot like you’re not doing enough or that it’s not effective because it feels too easy compared to the painful workouts you are used to.

When you practice Pilates, not only are you re-training your body’s way of moving, you’re also resetting your brain to a new feeling of normal. You are learning to connect deeply in the body, not just on the surface and it’s going to feel different from a typical old-school work out.

Surrendering the ideas of an old approach can open your body and mind to a whole new world of results. I’d like to suggest that it’s possible, in Pilates as well as life, to stop straining after our goals and to surrender into the present moment as we move gracefully into a positive and successful future.

I know this article was a little different from my usual. I hope it was useful and would love to hear your thoughts about this or anything else that’s on your mind. And if you test out this surrendering and choosing happiness in your Pilates practice, I’d love to hear about your experience!

And if there’s anything in particular you’d like me to talk about, be sure and comment on the blog—it’s a great place to talk about Pilates and share experiences with others.

See you in the studio,

P.S. – What is YOUR interpretation of the Vince Lombardi quote, “The harder you work, the harder it is for you to surrender”. Do you think surrender is good or a bad? 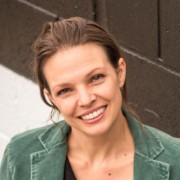 Hi, I'm Sydney and I'm a Restorative Movement Specialist here at Pilates Tonic. My goal is to empower you with tools to connect and live in your body in new and better ways. I'm a passionate advocate for wellness through optimally aligned movement and I look forward to designing a customized alignment and movement program just for you! If you want to find out more, just give me a call at 423.702.5233, or email me at info@pilatestonic.com. See you in the studio!